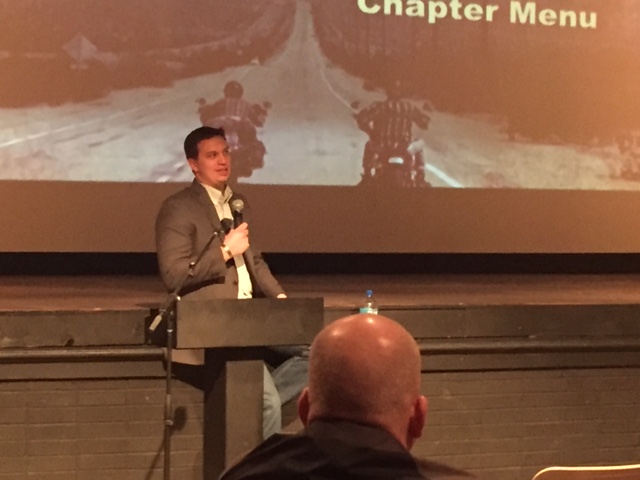 About 150 people attended the film and about 50 stayed for the discussion following the screening. Veterans that served in World War II to the present conflicts were throughout the audience.

“This was awesome,” was heard from many during the comment and discussion time following the film’s screening.  Many expressed their gratefulness for the film’s message of hope and comradery which can lead to healing.

Barbara Cessna, Vets Finding Vets Coordinator, welcomed all and introduced the film’s executive producer, local son and Veteran Theo Collins. Theo is a licensed Attorney within the Commonwealth of Pennsylvania and a member of the Bar Associations of Pennsylvania and Allegheny County. He is graduate of the Duquesne University School of Law and a Summa Cum Laude graduate of the State University of New York at Fredonia. He served as a Sergeant in the infantry of the U.S. Marine Corps, and deployed to Afghanistan in 2010 and 2011 in support of Operation Enduring Freedom. He also serves on the Veterans’ Advisory Board of Duquesne University.   The film was inspired by two combat wounded veterans’ personal loss and their determination to end a little-known epidemic in America. Their 22 day 6,500-mile cross-country mission was to raise awareness of the high rate of suicide amongst veterans and show their brothers and sisters-at-arms that there is hope for them. The film is an uplifting journey that continues to become more and more hopeful as more veterans join the journey.

Medicinal Missions, the production company that made the documentary, continues the awareness campaign, through events and social media, leading up to and following the release of the documentary. “Project 22” has been screened by request more than one hundred times around the United States, including the television premier hosted by Southern Oregon Public Television. The film can be seen for free streaming 24/7 online at http://www.pbs.org/video/2365668749/

“Project 22” was entirely crowd-funded via an IndieGoGo campaign and private donations. Medicinal Missions is a production company and social enterprise co-owned by Daniel Egbert & Doc King. Their first production, “Project 22” is fiscally sponsored by From The Heart Productions, a 501(c)3 non-profit.

The Fenton’s Vets Finding Vets program connects veterans to other veterans through events and research projects.  They each have war/conflict experiences and family stories that are unique and similar. There is no need to explain the effects of war or military life, each understands and their stories help those who have not served in the military to understand their struggles. The Vets Finding Vets program is coordinated by Barbara Cessna and funded in part by a grant from the Chautauqua Region Community Foundation.

All veterans are encouraged to join by calling the Fenton History Center at 664-6256.  For more information visit www.fentonhistorycenter.org.

Article originally appeared in the Post-Journal.